The Bekisar, or Ayam Bekisar, is the first generation of hybrid descendants of domesticated green junglefowl (Gallus varius) and Javan red junglefowl (Gallus gallus bankiva). Roosters are prized for their clear, loud calls that can be heard over long distances. They have traditionally been used for a long time to help people keep in touch while at sea.

The native inhabitants of the Sunda Islands carried the bekisars as symbolic or spiritual pets on their trips in Polynesian canoes, it is for this reason that these birds spread rapidly in many territories. Original hybrids are rarely fertile (and chickens are generally sterile), but backcrosses with domestic chickens are sometimes achieved, and thus many Pacific chicken landraces have some Bekisar ancestry.

The Bekisar is referred to as a hybrid chicken because this breed is the result of crossing 2 different species: the green junglefowl of the Gallus varius species and the domesticated red junglefowl breed (Gallus gallus bankiva).

The bekisar does not have the ability to produce purebreds with the same breed (bekisar X bekisar). In other words, we cannot have bekisar chicks by crossing a bekisar rooster and hen. 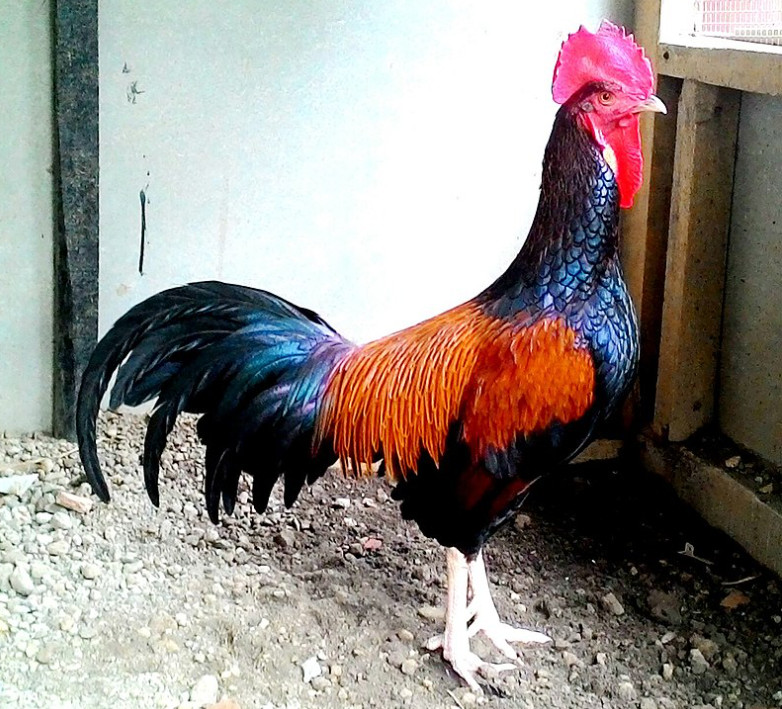 Like other hybrids in animals and plants, this breed is only obtained directly from the crossing of these 2 different species, and is commonly called as the F 1 (first generation / first filial) hybrid. only the first generation will get the characteristic color, temperament, and loud song.

Roosters have wonderful color patterns. This first generation creates multi-colored roosters with striking feathers, including an iridescent blackish-green, and loud crowing. There are many color varieties of bekisar but the most common are Black, Red, Yellow, White, Wido, Grey, Blorok (bahasa), and Jali (bahasa).

These birds are very docile and friendly towards their owners. The people of the Sunda Islands held their Bekisar in high regard; treating the breed as spirit pets. The Malay sailors transported the roosters of this breed in their canoes to different islands as they traveled.

These beautiful birds with strong songs have adapted to life in the native mangroves of the islands of Komodo, Java, Bali, Flores, Rinca, Lombok, and some small islands that join Java and Flores, in Indonesia.

Roosters are rarely fertile (hens are generally sterile, even if they lay a regular number of eggs they cannot be fertilized).

The practice of hybridization is so old that it is not known exactly where it began. The Sundanians and Javanese state that it first occurred on the Kangean Islands in the Java Sea. The native peoples of the Sunda Archipelago learned that they could persuade wild green jungle birds to mate with domesticated red jungle chickens.

The result of this crossing gave rise to the original Bekisar, the first generation hybrid. Man’s fascination with the hybridization of species is almost as old as this unusual breed.

Their long history in the Java Sea allowed the Bekisars to forage on the ocean shores. Feeding of marine species during low tide. This trait was acquired from the wild green birds of the jungle, allowing the Bekisar chicken to adapt to the varied conditions of the island. On the other hand, the Domesticated Red Junglefowl cannot survive as easily in this environment without some extra care.

A very creative use for the Bekisar rooster was to help sea-faring islanders communicate their locations with other ships. The roosters were selected for their loud and unique song that allows easy communication with other vessels 2 miles away.

A rooster would rise from the mast of the canoe in a special basket from which he would call to announce his presence. As roosters usually do, when one calls, another or others respond. In many of these early seafaring cultures, it was traditional to carry multiple Bekisar roosters on all of their voyages. Different roosters were used to communicate different messages.

Green junglefowl (Gallus varius) are the only wild variety of Gallus that carry the blue egg gene, making it an ancestor of Aracaunas and Ameracaunas, which also have this gene. Bekisar hens also lay a dyed egg.