At Chickenbreedguide.com we love to know all the breeds of hen that exist and tell you about their characteristics and curiosities. Every month we introduce you to a new breed, last month, for example, we talked about the Faverolles hen, a French breed with lots of qualities. But today, we are going to tell you more about one of the most popular breeds for free-range farming.

Chickens can be distinguished between purebred and crossbred. The purebreds are all those that have a fixed pattern and transmit it to subsequent generations, the offsprings will be identical to the parents, where the native chickens are. But when we speak of crossbreeds we refer to chickens that are born from the cross of other existing breeds. As is the case with the Isa Brown hen. 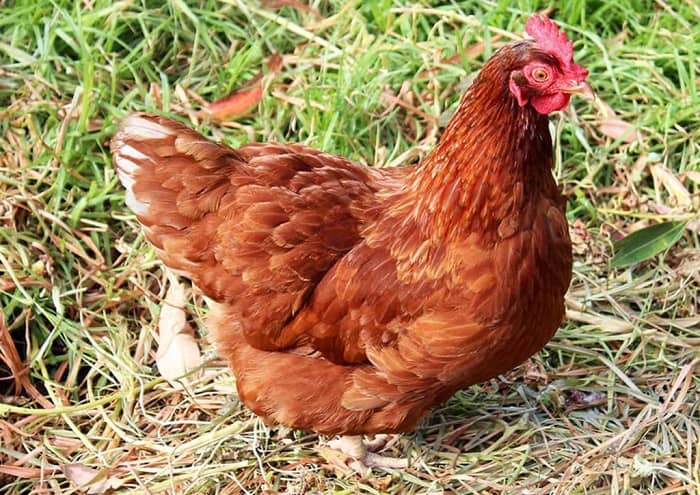 There is little information about its history, only that it has its origin in France and that it is the result of crossing the Rhode Island White purebred with the Rhode Island Red. There is a variety of information about what the origins are, what is clear is that it is born from the cross between a red rooster with a light white hen. It is characterized by its reddish plumage and being a very resistant hen to both high and low temperatures. They are the layers par excellence! They can lay more than 320 eggs a year.

Characteristics of the Isa Brown hen

It is known worldwide for its main characteristic, being an excellent producer of brown eggs. When a chicken farmer or breeder is looking for good results, they trust this breed without thinking.

Its main characteristics are its brown or reddish plumage. Their eggs are hard-shelled with excellent quality with an average weight of 60 grams. It has short plumage, pale yellow legs, and its crest is deep red. They are very docile species and close to their caretakers, being able to caress them without fleeing from their owners.

They are very receptive to sharing spaces with other poultry, they can coexist without problem in the same space with turkeys or ducks. However, they have a very defensive reaction towards other animals such as dogs, for example. In general, it is a very friendly and domestic bird, capable of adapting to any climate and place conditions.

Grazing makes them grow happier and healthier. And what is better, the intake of herbs provides the hens with nutrients, fibers, and amino acids that end up incorporated into the free-range egg, so it is easy to appreciate in them a greater consistency, a more intense aroma, and a characteristic flavor.

The excellence of these free-range eggs does not only come from this diet, it is also the result of careful attention by each of the people who are part of Pazo de Vilane. Remember that you can get our eggs in the main distribution chains.

ISA Brown in the Philippines

ISA brown is not a popular line of breed in the Philippines but many suspect that the Dekalb brown is similar, including some products of SASSO. Dekalb brown looks exactly the same as ISA brown and it is believed that they have the same breeds of parents but developed by other people. For someone who is familiar with Dekalb brown, when an ISA brown is introduced to him, he will surely identify the latter as Dekalb Brown instead of ISA brown.

Both ISA and Dekalb brown have the same plumage, appearance, and egg production. Dekalb brown is the favorite brown egg producer here in the Philippines.

How many eggs do ISA Brown chickens lay?

Isa Browns are a hybrid breed that really is in a league of their own. They are certainly up there with the best egg laying chickens. These hens can be expected to lay up to 300-350 eggs per year. That’s almost one each day of the year.

They are quite friendly, non-aggressive, and make a good hen for families. She is highly prized by many chickens keepers for her ability to lay lots of eggs.

How long does an ISA Brown live?

A common question from new chicken keepers is ‘How long does an ISA Brown live for? ‘ ISA Browns (and all commercial layers) have a significantly reduced life span/life expectancy compared to a healthy purebred chicken – with a majority living for between 2-3 years.

They are winter hardy and tolerate heat fairly well, although shade and water should of course be provided. Isa Brown’s can tolerate a wide variety of climates – ISAs’ are very popular in Australia and the US.

Are Hy-line browns and ISA Browns the same?

Please be aware that the name ISA Brown (what HYLINES are often referred to) is actually a brand, much the same as Toyota or Samsung. The ‘ISA’ stands for “Institute de Selection Animale” – a French company that developed the breed in 1978 as a battery hen for optimum egg production.

Why do ISA Browns stop laying?

It is called “molting” and it’s often a time when hens will lose feathers and stop laying eggs. This is a situation that is difficult to fix if you have purchased a purebred hen. The only real solution is to purchase a hybrid hen such as a Hy-Line, Lohmann, or ISA Brown if you want consistent eggs throughout the year.

How long does it take for ISA Brown chickens to lay eggs?

ISA Browns are prolific egg layers and are known to provide you in excess of 300 large, brown eggs annually- that’s a whole lot of frittatas! They are also bred to begin laying much earlier than pure breed chickens- you can expect eggs from around 20-22 weeks of age.

What breeds make up the ISA Brown?

The ISA Brown is a crossbreed of chicken, with sex-linked coloration. It is thought to have been the result of a complex series of crosses including but not limited to Rhode Island Reds and Rhode Island Whites, and contains genes from a wide range of breeds, the list of which is a closely guarded secret.

How much are ISA Brown chickens?

A point of lay Isa brown will usually cost between $15-40. You can also buy day-old Isa Brown chicks for around $10.

So, we can say it is a dual-purpose chicken. Farmers use this bird, especially for a bulk amount of egg production. The massive egg-laying capacity makes this fowl among the top-most egg-laying birds. Also, Isa brown chickens are very sweet and quiet-mannered.