Plymouth Rock was developed in America in the middle of the 19th century and was first exhibited as a breed in 1869. Several individuals claimed its invention, using crosses of Dominique, Java, Cochin, and Brahma. The first Plymouth Rock was barred and other varieties developed later.

The Breed became popular very rapidly, and in fact, until World War II, no breed was ever kept and bred as extensively as the Barred Plymouth Rock. Its popularity came from its qualities as an outstanding farm chicken: hardiness, docility, broodiness, and excellent production of both eggs and meat.

Most of the other varieties were developed from crosses containing some of the same ancestral backgrounds as the barred variety. Early in its development, the name Plymouth Rock implied a barred bird, but as more varieties were developed, it became the designation for the breed. The Barred Plymouth Rock was one of the foundation breeds for the broiler industry in the 1920s. 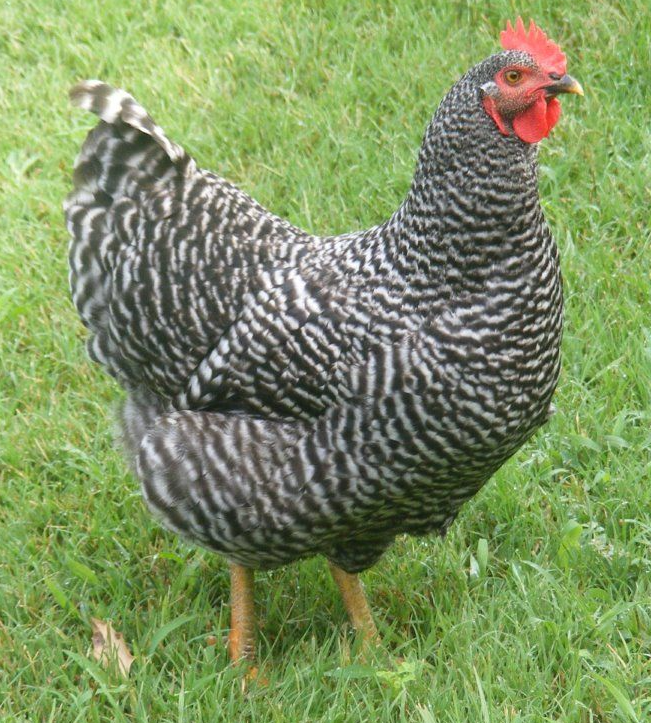 Plymouth Rocks are good general farm chicken. They are docile while showing some broodiness. They possess a long, broad back and a moderately deep, full breast. They have a single comb of moderate size. Some strains are good layers while others are bred principally for meat. They usually make good mothers. Their feathers are fairly loosely held but not so long as to easily tangle. Generally, Plymouth Rocks are not extremely aggressive and tame quite easily. Some males and hens are big and active enough to be quite a problem if they become aggressive. Breeders should be aware of the standard weights and not select small or narrow birds for the breeding pen. Common faults include shallow breasts, high tails, narrow bodies, and small size.

With the growing trend of keeping chickens personally at home or on a homestead, the Plymouth Rock chickens have found a renewed level of demand. The Barred Plymouth Rock is the most popular color variety of the Plymouth, having beautiful plumage of black and gray bars on each feather.

These chickens are suitable for beginners and for those that are raising chickens on a family homestead. Their laid-back nature and general lack of noise make them a gentle “break-in” breed as you begin a flock.

Plymouth Rock’s personality is one of its most winning characteristics beyond its high-quality, dual-purpose production. These naturally curious creatures can quickly become your feathered friends.

The Plymouth Rock chicken is one of the most docile chicken breeds to raise. With a bit of patience, they rarely get flighty around humans, particularly those they recognize.

They are a good choice for adults beginning to keep chickens and the kids of a family since they perform well around all ages.

Overall, although they are still active chickens, they have sweet, docile personalities. They have been known to become lap chickens, follow their keepers around, and enjoy getting stroked and attention from you.

Plymouth Rock hens are quite likely to go broody. They aren’t known for their exceptional broodiness, but their tendency is towards it.

If they go broody, they are great mothers, and you won’t have to worry about the chicks’ well-being. Otherwise, you can always use an incubator.

These docile and loving chickens tend to prefer being kept in smaller flocks. The noises they make often sound closer to a “coo” than louder clucking common in other breeds, such as the Minorca chicken.

It is easy to keep a Barred Plymouth Rock chicken in a smaller area or a legalized neighborhood without causing a stir.

These chickens are not known for picking fights with other birds in their flock, even different breeds. They are assuredly lovers, not fighters.

Overall, Plymouth Rocks are considered a pleasure to own since they enjoy much more human interaction than other breeds and tend to get along with other chickens in their flock. Even roosters are known for their relatively docile nature.

Where to Buy Barred Plymouth Rock in the Philippines?

If you are in the Philippines and are planning to raise BPR, join Facebook groups of heritage chicken breeders. you can find a lot of other members selling Barred Plymouth Rock chicks, breeders, and even fertilized hatching eggs.