The Faverolles hen comes from the eponymous town located in Eure-et-Loir, France. This municipality is proud of Faverolles and dedicates a page of its website to this breed of hen with many qualities. But what exactly are the strengths of this famous breed? Can it find its place in a breeding project?

Breed Origin and History: Creation of the Faverolles Breed

The Faverolles breed of hens comes from the Houdan breed.

Faverolles is a town located about ten kilometers south of Houdan, a town in Yvelines considered to be an important center for poultry farming. Already known under Louis XIII in the 17th century, Houdan had its heyday in the 1870s. The whole of Paris was then looking for fatty and plump hens, with very tender flesh: 600,000 Houdan were sold between 1872 and 1873. The “mother” of Faverolles had plenty to seduce with hens weighing up to 5 kg. Not to mention that the proximity to the capital made supply easier and less expensive than for poultry from Le Mans or Bresse. 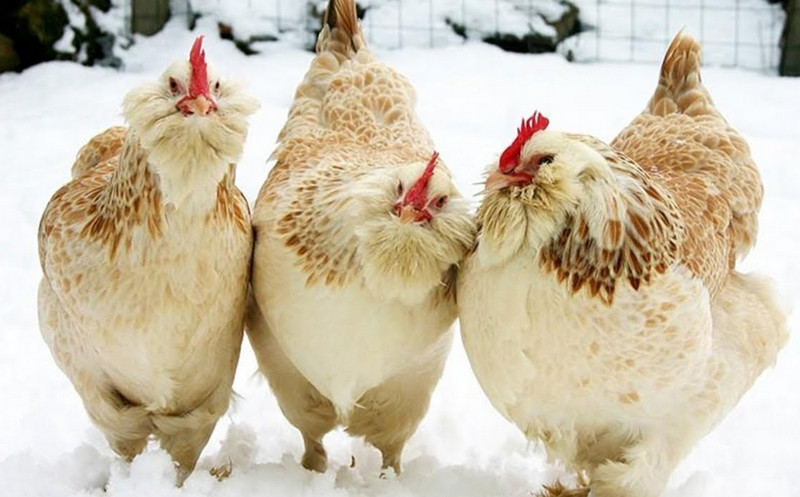 It was in the 1860s that breeders created the Faverolles. But very quickly, this large-sized hen experienced multiple crosses to remove her crest, which was considered troublesome: Brahma, Dorking, Cochin, and Langshan were used in particular.

The result of these crosses? The Faverolles has the feathered legs of the Brahma, but also the color of its eggs and its robustness. She has 5 fingers like the Houdan and the Dorking. This hen was also very successful in Paris, alongside Houdan, in the 1870s, especially since she tolerated confinement better.

While the English had already defined a standard for the breed, even though it was not introduced to England until 1886, the French did not work on defining a standard until 1930. Essentially considered a hen farm that was not intended to be presented in competition, there should not be any urgency.

Given the food issues in the capital, production criteria have also long predominated over aesthetic criteria. However, when it came to fixing things, it was aesthetics that prevailed: the Faverolles is the hen with the “owl head”, a name inspired by his beard and his well-provided sideburns, the latter covering his mumps. Its crest remains simple.


The Faverolles is a beautiful large hen, with a powerful and majestic silhouette. The wings are tight to the body and carried horizontally. Its tail, with short sickles, is carried in a bouquet. Its neck is of medium length.

Roosters do not have the same colors as hens and you have to be an expert to identify that they are the same breed. The chicks can be easily sexed around the first 10-15 days thanks to a black line that appears on the wingtips of the males.

There are 3 types of Faverolles hens: the French, the English, and the German which are distinguished by the color of their plumage. The English tail, however, is taller than those of the other two varieties. Of the three types, the Salmon Faverolles became the most popular until today.

The Faverolles: Its Many Qualities and Few Flaws

The growth of Faverolles is rapid and its flesh is fine. She gives beautiful chickens for consumption.

These hens are also good layers, being able to lay even in winter. In total, you can expect 200 eggs per year. But you have to adjust the weight of the hen and her ability to lay eggs. The more a Faverolles weighs, the less abundant it will lay. It produces large-caliber eggs, weighing about 60 g each, that are cream to light brown in color.

She is also a good mother who carefully raises her chicks.

When they are young, they are very active hens that move tirelessly over the entire surface at their disposal, in small groups generally corresponding to the brood from which they came. But this activity suddenly stops when they reach a more mature age, around 6 months, becoming unrecognizable “grannies”.

They are hens with a gentle and docile character, animals that are easily tamed. You even have to push them gently when you want to move around because they will not move quickly. This does not mean that they should be deprived of space where they can peck, scratch or eat weed at will. An animal is always happier in freedom. In addition, a mesh 80 cm high will suffice because it does not fly.

Its beautiful plumage makes it an ornamental hen. But the aesthetic qualities are counterbalanced by drawbacks: these hens fear high temperatures, but also fatty soils. Indeed, due to the feathers on the legs, the mud can more easily stick to it, which can cause the appearance of frostbite and fungus.

The plumage provided by this hen also favors the presence of parasites. However, against parasites, nothing like a sand or ash bath! We must therefore think about leaving them the possibility of rolling in these subjects.

Finally, Faverolles can see their vision really reduced by their beards and barbs to the point of not eating properly. It is, therefore, necessary to monitor their diet closely.

In Europe, It will cost you around thirty Euros maximum to acquire this hen with many qualities. Always compare prices and ascertain the origins of the hen before making a purchase.

Faverolles in the Philippines

Because Faverolles is an expensive chicken breed, there are very few people who raise Salmon Faverolles in the Philippines. It might be difficult to find them but if you dedicate time to searching Facebook and joining groups, you might be lucky to find one.

Faverolles are good egg layers and can lay up to four eggs a week. This works out to be in the 180-200 eggs per year range. They are known for maturing quickly and can start laying a little before they are 20 weeks old.

What color eggs do Faverolles lay?

Faverolles are good-sized chickens with a beard, muff, feathered legs and feet, and fifth toe. Males are straw-colored with reddish-brown and black markings. Females are a creamy white and salmon brown and lay cream-colored eggs.

How big do Faverolles get?

Faverolles chickens are recognized as a standard breed by the American Poultry Association in two varieties: Salmon in 1914; White in 1981. Males weigh 8 lbs and females weigh 6.5 lbs. Hens are expected to lay approximately 150-180 eggs per year.

Do all Salmon Faverolles have 5 toes?

Each foot Faverolles has five toes – a genetic presence from the Dorking.

Faverolles roosters are particularly calm and dignified and make great roosters for the home flock since they are not as aggressive as some others.

Salmon Faverolles are well known for their sweet disposition which makes them a great addition to a backyard flock and as pets for children. They’re hardy and can handle cold weather with reasonable accommodation. Faverolles hens lay well since they were initially bred to lay all Winter for the Paris Market.

In this case, Salmon Faverolle roosters have a crow that makes them unique. They have a loud crow that sounds like a typical crow you would hear from many other breeds.

Salmon Faverolles are commonly raised for meat. Mature roosters weigh anywhere between eight and ten pounds, while hens tip the scales at around six. This varies depending on where you are raising your birds, what you are feeding them, and how long you let them grow, of course.

How long do Faverolle chickens live?

The expected life span of a Salmon Faverolles is between five and seven years. The fluffy feathers of the Faverolles can present a bit of a health problem to the chicken, so it is of the utmost importance that you keep a check and ensure that common parasites do not take up residence on the chicken.

If one is looking for showy gentle chickens this is the breed to have. They are excellent layers in cold weather and while they go broody occasionally they are not obsessive about it like the Silkie or Cochin breeds The Faverolles is a French breed and considered in the continental classification.

Salmon Faverolles status is listed as ​rare and threatened.

Salmon Faverolles are exuberant about life. They are friendly, curious, and comical. They will dash wildly around the yard bumping into each other, and carry on as if whatever they are doing is of the utmost importance. They are very cuddly and lovable hens, and they enjoy talking with you, especially one on one.