The Appenzeller Spitzhauben is the national breed of Switzerland, noted for its very unusual forward-pointing crest and v-shaped comb. These birds are well-adapted to life in the mountains, are excellent climbers, and love to roost in trees. They really don’t do well in confinement, so don’t keep them unless they can be allowed to roam freely throughout the day.

The origins of the Spitzhauben are unknown. It has been bred in the mountains of the Alpine region for hundreds of years. A similar breed, the Brabanter of the Low Countries, is shown in paintings of the seventeenth century; it has been suggested that the Spitzhauben may have originated at about that time.

In the twentieth century, it was found only in the historical Appenzell region of Switzerland – the “half-cantons” of Appenzell Ausserrhoden and Appenzell Innerrhoden. Some birds were shown in 1935 at the national poultry show, but by about 1950 the Spitzhauben was close to extinction. A recovery project was launched in 1983 with the help of ProSpecieRara; 230 chicks were hatched in that year. A flock book was started in 2005; in 2019 the recorded population consisted of 243 hens and 153 cocks. 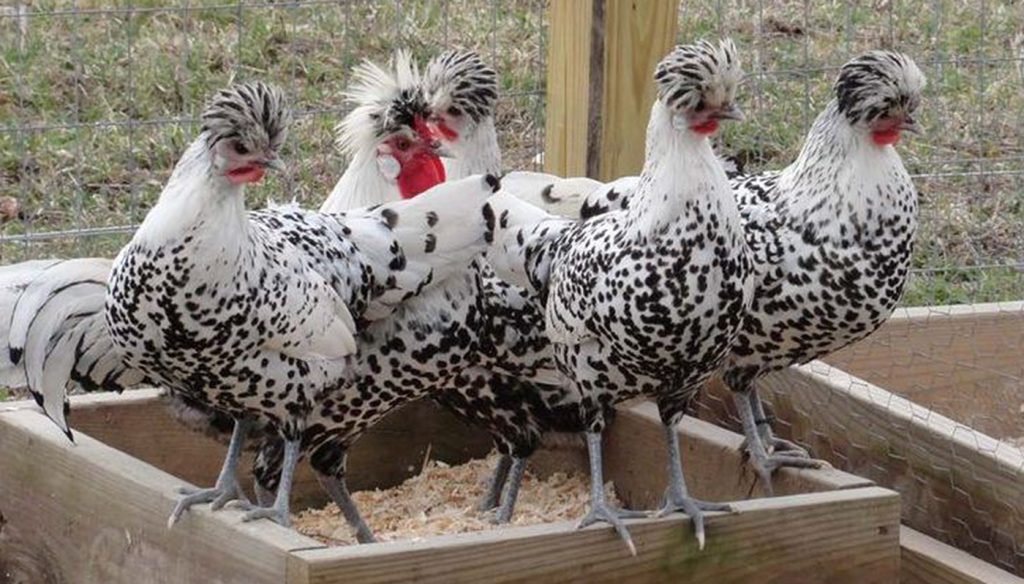 The Spitzhauben is a light chicken: hens weigh little more than a kilogram, and roosters barely over 1.5 kg. It is an active breed that doesn’t do well in close confinement, can forage well, and will roost in trees if given the opportunity. In North America, it is very rare and is recognized officially by neither the American Poultry Association nor other breed registries. The silver-spangled Spitzhauben is the most common variety.

The Spitzhauben variety, meaning “pointed bonnet”, has a V-comb and feather crests in males and females. The word ‘spitzhauben’ derives from a ceremonial hat worn by the women in the Appenzeller region in Switzerland. The breed was imported into America by a doctor. Spitzhauben is recognized by the EE Standard commission in the following colors: silver-spangled, gold-spangled, lemon-spangled, chamois-spangled, pure black, and pure blue.

The Silver Spangled Spitzhauben, chicken also known as Appenzeller Spitzhauben (pointed hood) chicken, originated in Switzerland and is their national bird. This chicken is very rare in the United States and has not yet been admitted to the American Standard of Perfection.

An Appenzeller Spitzhauben can withstand any weather, especially during cold days. They are unremarkably more productive in laying eggs during the winter season. This is not common to most chickens. Therefore, they are acknowledged as high-range when it comes to egg production, making them good layers.

What color eggs do Spitzhauben lay?

The Appenzeller Spitzhauben (not an APA-recognized breed) is a relatively small European breed developed for egg production. Commonly known simply as Spitzhaubens, this breed lays a white shelled egg and has white skin.

Appenzeller Spitzhaubens are exceptionally cold hardy. Not only are their combs smaller than many breeds, which helps protect them from frostbite, but their crests also help keep their combs warmer.