What is Cornish Chicken – History, Behavior, and Breed Information

The Cornish chicken is one of the most widely used breeds in the poultry industry for the production and marketing of meat. This is because it is a fairly heavy and muscular bird, and its meat is known to be quite soft and juicy.

If you are interested in raising chicken for fattening, the Cornish breed is an excellent option, since it has a large amount of meat on the breast. If you want to know more about its characteristics, origin, food, etc., we invite you to continue reading this article.

Origin and History of Cornish chicken

The Cornish hen, also known as Game Chicken, originated from a group of diverse birds, among which were the breeds of Aseel, White Malay, Shamo, Red old English, and Tawny Cochinchina. The diverse characteristics of each of these races resulted in the origin of a bird (Cornish) with ideal characteristics for fattening. The Cornish originally arose in England and was developed by General Walter Raleigh Gilbert in 1820 as an English breed of bird. The main purpose of its upbringing was to use it as a wrestler, however, the chicken turned out to be an excellent meat producer due to its rapid growth and juicy white breast meat. 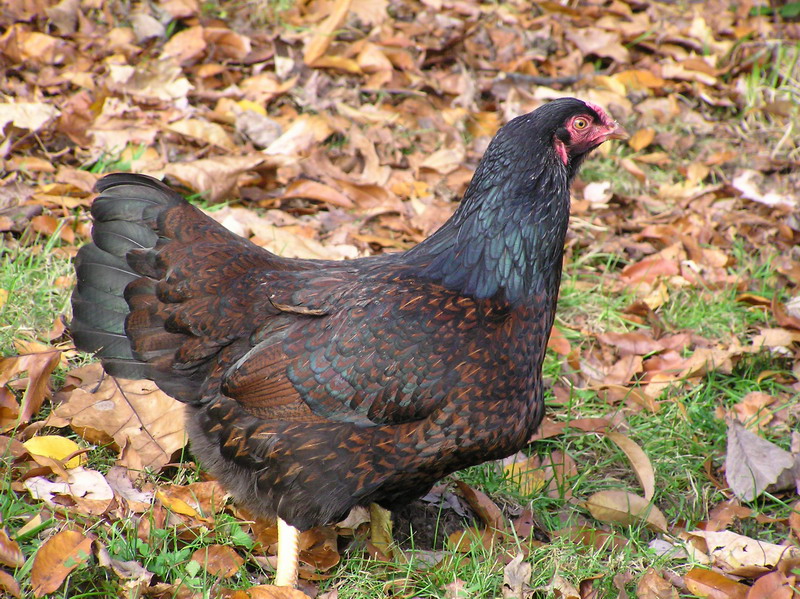 The behavior of Cornish chicken

The Cornish breed is considered quite strong, active, and of docile behavior. Roosters are not fighters, so it is important to keep the birds in confinement and not mix them with other breeds, due to their poor ability to defend themselves. On the other hand, hens tend to be more pugnacious, due to their mother’s protective instinct during the rearing of their chicks, so it is important that you keep them isolated during that stage.

Characteristics of the Cornish chicken

As we already know, this breed is quite heavy and muscular, and its external appearance is quite similar to other birds that are used for meat production. However, the main characteristics of the chicken are as follows:

Reproductive and productive characteristics of the Cornish breed

This breed has a great impact on the poultry industry due to its ability to obtain meat, which has a large amount of meat in the chest. This makes Cornish stand out among other broilers within industrial poultry farming. The reproductive and productive characteristics of this bird are the following:

During the early stage of development, feeding Cornish chicks is usually fairly straightforward. In their first weeks, the amount of food ingested by newly hatched birds is quite low. After this stage, the consumption of food will increase, so it is important that your hens have food as long as possible, since this will help accelerate the growth of the hens and like the cobb hen, which is of the breed faster development.

Keep in mind that you must provide them with balanced food, because in meat or fattening hen breeds, the metabolism slows down, which causes obesity. You can get food for this kind of bird in any market. Remember that depending on the brand of food, it will influence the results of your birds. The best thing is that your hens eat the best products on the market since that way you will be able to obtain birds with maximum performance.

What type of chicken is a Cornish?

Cornish game hen (also Rock Cornish game hen) is the USDA-approved name for a particular variety of broiler chicken, produced from a cross between the Cornish and White Plymouth Rock chicken breeds, that is served young and immature, weighing no more than two pounds (900 g) ready to cook.

What are Cornish chickens good for?

Developed as the ultimate meat bird, the Cornish has contributed its genes to build the vast broiler industry of the world, Its muscle development and arrangement give excellent carcass shape.

Are Cornish hens healthier than chicken?

Because of their small size and lighter weight, Cornish hens have less fat and fewer calories compared to chicken, making them healthier. Like all kinds of poultry, Cornish hens are also rich in protein, but they are also a good source of B12, which helps prevent cataracts, skin diseases, and heart disorders.

How do Cornish hens taste?

Is Cornish hen a baby chicken?

Does Cornish hen have white meat?

Since they are comprised of primarily white meat, Cornish hens are very lean and rich in niacin, which can help lower cholesterol and boost brain function.

They cost more than regular chicken, but as splurges go, it’s a cheap thrill. Aside from the diminutive size, their most notable trait is the tenderness of their meat, and the way it can accommodate a lemony marinade or quickly absorb the flavors of a spice rub.

Is Cornish hen the same as quail?

Cornish hens, which are usually young chickens of the Rock Cornish breed and can be male or female, tend to be a bit larger, closer to the 2-pound range. It may take several quails to create a dinner, but one Cornish hen could feed two or three people.

They’re at least as scrumptious as turkeys, but they’re much smaller — weighing in at 1 pound to 2 pounds — making them easier to cook. They roast up much more quickly, and you don’t have to wrestle them into a roasting pan to make them fit.

How do you eat a Cornish hen?

Cornish hens are best oven-roasted or grilled. Because they are small, whole ones cook in less than an hour. If you’ve split them in half, they’ll cook in even less time. Another way to cook them quickly is to cut the back out and flatten them.

How much is a Cornish game hen?

Can you cook cornish hens frozen?

You can cook them in an oven from frozen but it will take longer and you have to take some measures to keep it from drying out or burning on the outside before it cooks completely on the inside. This recipe for Instant Pot Cornish hens is the best way to get the job done.

How are Cornish game hens raised?

They are a heritage breed, meaning they’ve been bred for many years in a particular location with traits conducive to thriving in that environment. They are now raised by backyard enthusiasts and on small farms. Cornish chickens are poor egg layers and are bred for meat.

How big do Cornish Cross chickens get?

Cornish Cross hens can grow to eight pounds in as little as eight weeks. Look at it this way, Bresse, Buff Orpingtons, Buckeyes, and Chantecler chickens all mature around 7 to 9 pounds but it takes them 16 to 21 weeks to get there, twice the time of the Cross and twice the feed. Buckeye and Chantecler roosters.

How long do Cornish chickens live?

If you raise your Cornish chickens in healthy conditions, they should live as long as any other breed. The average chicken lifespan is 5-8 years.

Why is it called Cornish game hen?

The name is a specific reference to the fact that the chickens are of the Cornish breed. Initially, the name Guinea hen was used to refer to these small birds, but the Cornish game hen has become more popular as the result of Connecticut farmers Jacques and Alphonsine Markowsky’s breeding practices in the 1950s.

Cornish chickens are not prolific egg layers. Generally, they lay fewer than 160 eggs per year. These eggs are small and brown. Physically, their heart-shaped body reduces the amount of room available for carrying eggs.

What is Cornish Cross chicken?

The Cornish Cross or Broiler is a hybrid breed crossing a Cornish with a Plymouth Rock. The resulting bird is fast-growing, reaching table weight at around 8 weeks. This quick maturing, large breed makes it a cost-effective investment with good feed conversion.

Is Cornish rock the same as Cornish Cross?

The original Cornish cross chickens were a cross between a Cornish chicken and a white rock chicken. They are also called “Cornish Rock cross” or “Cornish Rock” chickens. Those first chicks grew so fast and so heavy that farmers began to breed selectively for those traits.

Cornish in the Philippines

It is difficult to find a pure Cornish breed in the Philippines but if you thoroughly search on Facebook Groups, you might be lucky. Cornish is the main parent stock of the 45 days old broiler (Cobb-Vantress) which can be found anywhere in commercial poultry production. These 45-day-old broilers are often crossed between Cornish and Rhode Island White. This is the reason why people who are knowledgeable about the Cobb-Ventress 45-day old broiler called the chicken “Cornish Cross”.