The Vorwerk chicken is a breed originating from Hamburg, Germany. The bird was developed by German breeder Oskar Vorwerk, who gave the breed its name. His intention was to develop an attractive breed of chicken that would be easy to breed and would be a good-sized dual-purpose bird.

Vorwerks are attractive birds with a single, bright red crest, white earlobes, and slate-blue legs. He has a broad back, a deep and well-rounded chest. The head of the chickens is wide, and the face is well feathered. 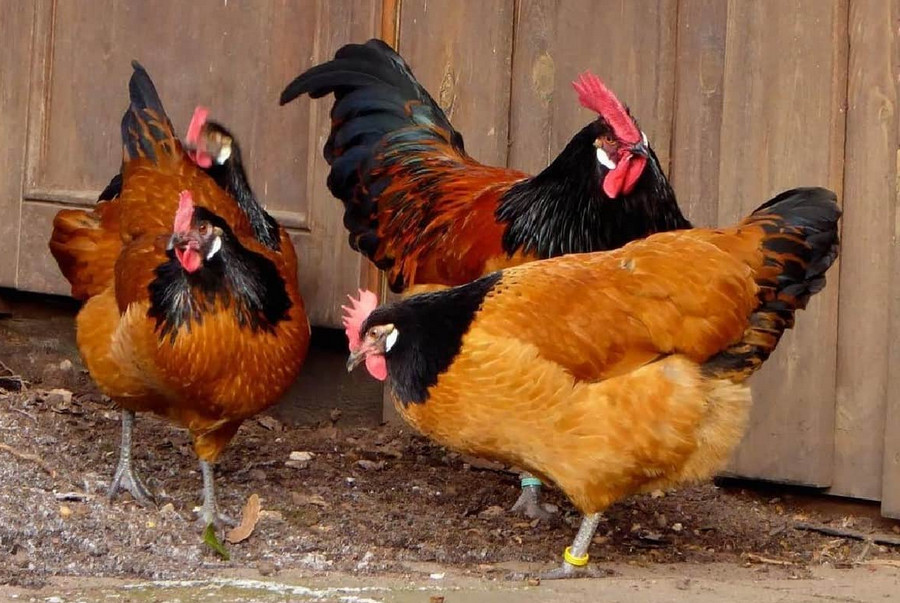 In terms of plumage, its head, neck, and tail are solid black, while the rest of its body is a buff color. The ideal of the breed standards does not require black spots in the buff color areas, but in practice, this is very difficult to reproduce.

Appearance and Characteristics of Vorwerk Chickens

The temperament of the Breed

Vorwerks are hardy birds in cold climates. Breeders use terms like adaptable, active, and alert to describe them and they are considered a calm breed. The breed standard has not achieved widespread popularity, or commercial use, and is virtually invisible outside of mainland Europe.

Hens are good producers of cream-colored eggs (approximately 160-190 eggs in a year), but they rarely hatch.

Around 1900, poultry breeder Oskar Vorwerk began to develop a medium-sized utility bird with a belted plumage pattern similar to the Lakenvelder breed. The key difference in appearance would be the Vorwerk’s dark gold base color, rather than the white of the Lakenvelder. Therefore, the breed is sometimes incorrectly called the Golden Lakenvelder, especially in North America.

Breeds used to create the Vorwerk include the Lakenvelder, the Buff Orpington, the Buff Sussex, and the Andalusian. In 1913, the Vorwerk was standardized. However, it never caught on and is rare or non-existent outside continental Europe.

On the Brink of Extinction

The breed is currently in danger of extinction but was once a popular bird throughout Europe. In modern agriculture, heritage breeds of chickens are rarely used because they tend to produce far fewer eggs than hybrid breeds.

Some breeders claim to have Vorwerks in America, but this breed can be confused with Golden Lakenvelders. It’s worth taking a close look at the family tree of birds claimed to be Vorwerks, including evidence that they were legally imported. The Bantam variety of Vorwerks has been around in the United States for a few decades. These American bantams were not imported but were developed in the American country.

The Standard German Vorwerk and the European Bantam were never admitted to the APA, although the US Bantam is recognized by the APA and the American Bantam Association.

What Colour eggs do Vorwerk lay?

Large Vorwerk hens are good layers of cream-colored eggs and will produce approximately 170 in a year. Bantams are also dual-purpose, but (like all bantams) lay smaller eggs and fewer of them. Vorwerk is hardy, adaptable bird with economical appetites.

They are alert, busy birds with fairly small appetites and chicks are fast growers which mature quickly. However, they are good fliers and can fly around 2 meters so adequate fencing should be provided.